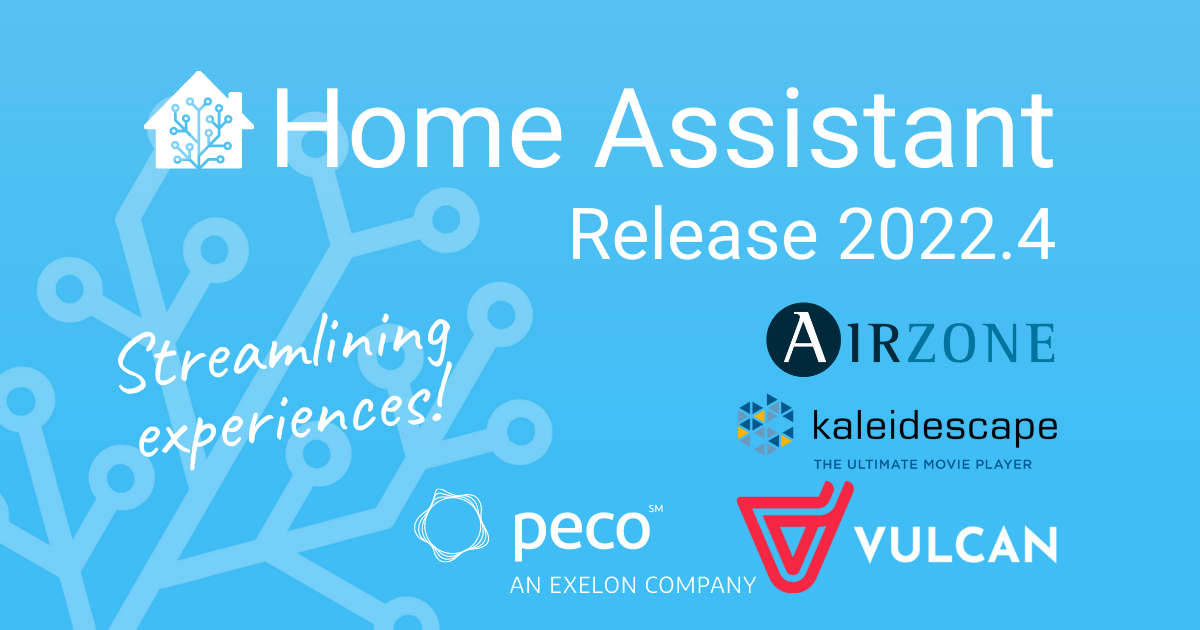 👋 I’m not sure where to start with this release; It’s April, and I can
assure you: This release is no joke. Seriously, it is packed with features
and incredible new things 🤯.

The release focuses on adding features to the user interface by bringing
in user experiences and features that were previously only available to users
using YAML configuration and making them now accessible for all! It is a
great step forward in streamlining all the user experiences.

I could not fit more in these release notes, but there is more to tell!
Zack and Paulus promised to add a couple of great (and exclusive)
announcements to the newsletter! The newsletter has, by the way,
been renamed: Building the Open Home. Be sure to check it out!

I want to invite you to read the (long) release notes below. I’m sure there is
a lot in there you will like and love ❤️.

Let me know what you think the killer feature of this release is?

In this release, we are saying goodbye to “Lovelace”; we renamed it to
“Dashboards”.

Over an extended period, we have been slowly introducing the term “Dashboards”
more and more, so everybody could get used to it. As of this release, the term
“Lovelace” has been entirely replaced by “Dashboards”.

This rename is done to improve the user experience and streamline Home
Assistant. The term “Lovelace” doesn’t say much for new users, and they
would need to learn about it. “Dashboards”, however, speaks for itself.

So, what does your Home Assistant Dashboard look like?

Besides enabling/disabling entities, it is now also possible to hide them. 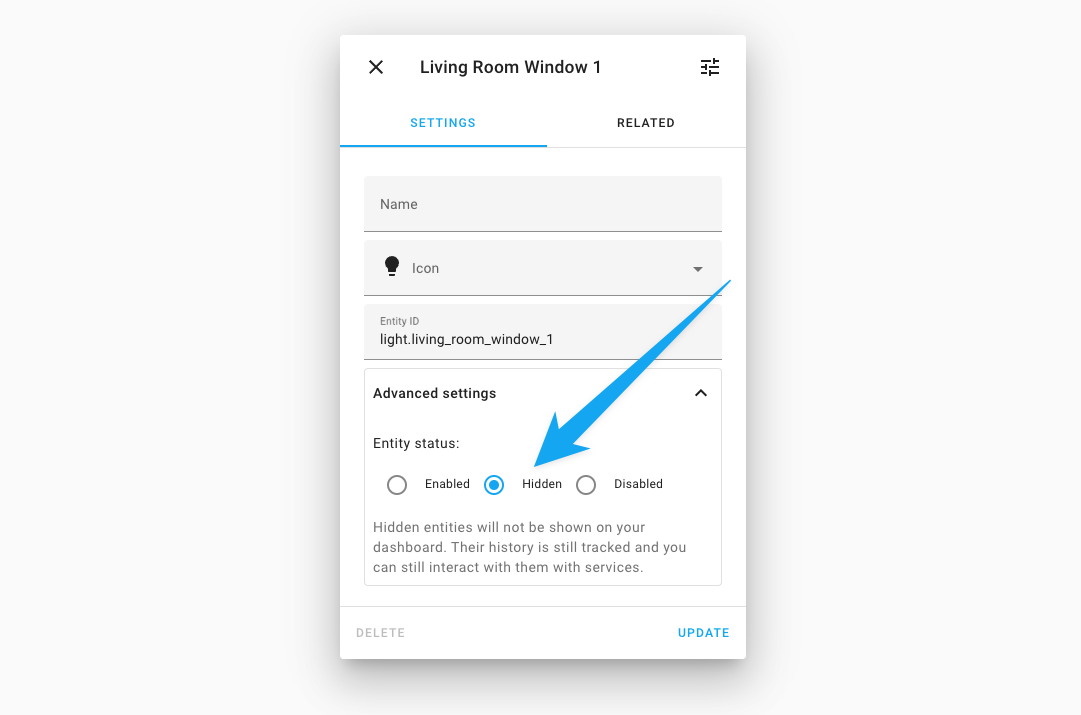 You can now mark an entity as hidden in the entity settings.

Hiding entities will hide them from most places in the UI, but they are
still there and are still being recorded.

However, they are no longer shown on auto-generated Dashboards; they are
automatically hidden from HomeKit, Alexa & Google Assistant and aren’t
called when a service call targets their area.

Hiding entities can be used to clean up your automatically generated Dashboard
or hide those light entities that you have put into groups. About groups…

Now available in the UI: Groups!

A group lets you combine multiple entities into a single entity. Entities that
are members of a group can be controlled and monitored as a whole. Useful for
cases where you want to control, for example, the multiple bulbs in a light
fixture as a single light in Home Assistant.

Using groups is a very common use case, but, until now, an advanced use case
as groups were only available for YAML configuration. As of today, groups are
available in the UI! 🎉 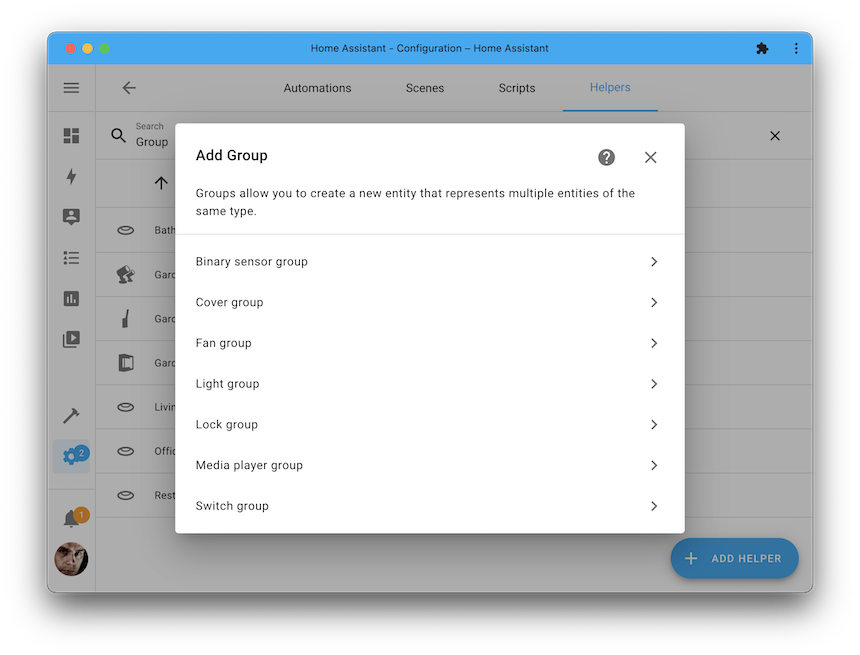 Select the type of entities you want to group and select the group members
you want to add: Done! You can group multiple types of entities: binary sensors,
covers, fans, lights, and media players; also added in this release is
support for lock and switch groups.

Remember the hide entities functionality described above? That is super helpful
for hiding those individual light entities of your light fixture. So, when you
create a new group in the UI, you can select to hide all group members
automatically! 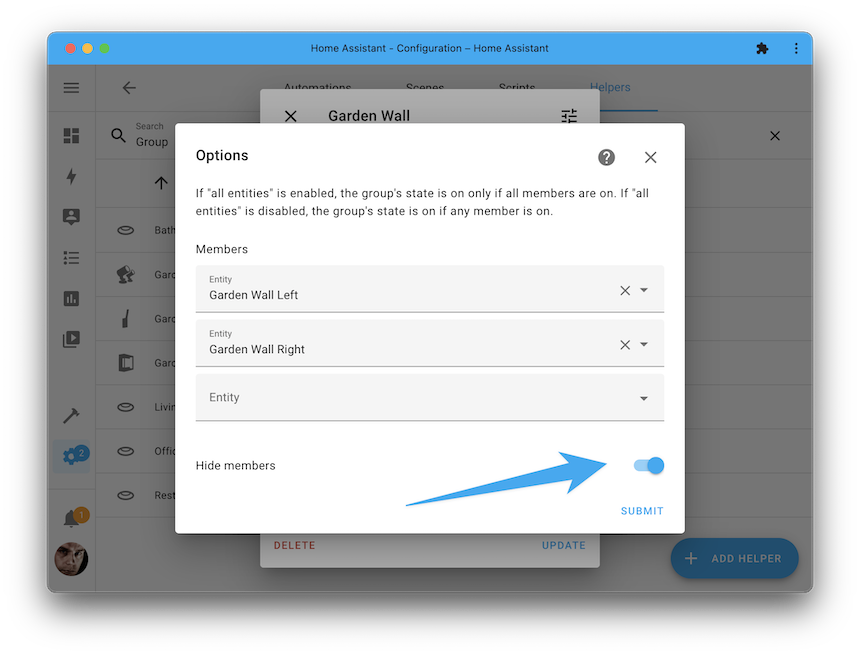 Your groups can be found under Configuration > Automations & Scripts > Helpers,
or, if you have updated to this release already, click the my button below to
add a new group immediately:

In Home Assistant’s world, a wall plug is a switch. And while that is correct
for a wallplug in general, those plugs (or relays) are often used with a light
fixture, a fan, garage door, or maybe your Christmas tree lights. 🎄

This release introduces the “Switch as X” helper, which lets you convert any
Home Assistant switch into a light, cover, fan, lock, or siren to match your
real-world use better.

Switch as X can be found under Configuration > Automations & Scripts > Helpers,
but wait! We made it easier: You can also change the switch itself when
editing the switch entity:

The video above shows how to create a new light entity, which uses the
original switch. The original switch is now automatically hidden from most of
the Home Assistant UI but is still available on this device page.

If you have updated to this release already, click the my button below to
transform one of your switches right away:

The above Groups and Switch as X, are to be found in what we call: Helpers.

Helpers are integrations that expose a way for a user to provide input or
consume existing data in Home Assistant to provide a new entity.

The latter category of helpers has very much been extended in this release!
Not just groups and switch as X, but we have many more helper integrations
available in the UI now!

This release brings the following helpers to the UI:

Update entities can tell you if an update is available for your device and
service and, in some cases, allow you to install the update straight from
Home Assistant!

And the beautiful thing is: They show up in your configuration Dashboard, just
like a Home Assistant, Home Assistant OS, or add-on update. As a matter of fact,
those are now update entities too!

Now updates are entities, other integrations can provide them too! For example,
a WLED firmware update for your LED strip will show up and installs
with a single click.

A WLED firmware update can now be installed just like any other update.

These update entities can be provided by integrations and provide more
information about the update, like: Version information, links to release notes,
and the possibility to skip that specific version offered.

The blue number indicator on the configuration cog icon in your sidebar tells
you how many updates are pending.

And because they are all entities, it means you can automate with them. For
example, you could send a notification when a new add-on update is available
for installation.

That all changes this release: Introducing a Backup integration for Home
Assistant Core and Container installation types!

Home Assistant Core and Container installations can now also back up their instance.

These backups can be downloaded and extracted if you want or need to restore one
of the previous backups. Also, these backups are compatible with Home Assistant
OS installations. So, if you plan on migrating installation types in the future,
that is now super easy!

You can find the backup dashboard in the configuration menu, or, if you have
upgraded already, click the my button below to create a new backup right away:

In our previous release we added a feature to see if the automation
you create triggers correctly. During the release party live stream,
we got questions: “Can this be done for conditions too?”; Sure we can!

Every condition now has a little test button, to test if the condition passes right now.

Additionally, the “triggered” bar got an additional feature too! You can click
on it to get a raw view of all trigger variable data. This data
can be helpful in case you want to create an advanced condition or template
using that information. 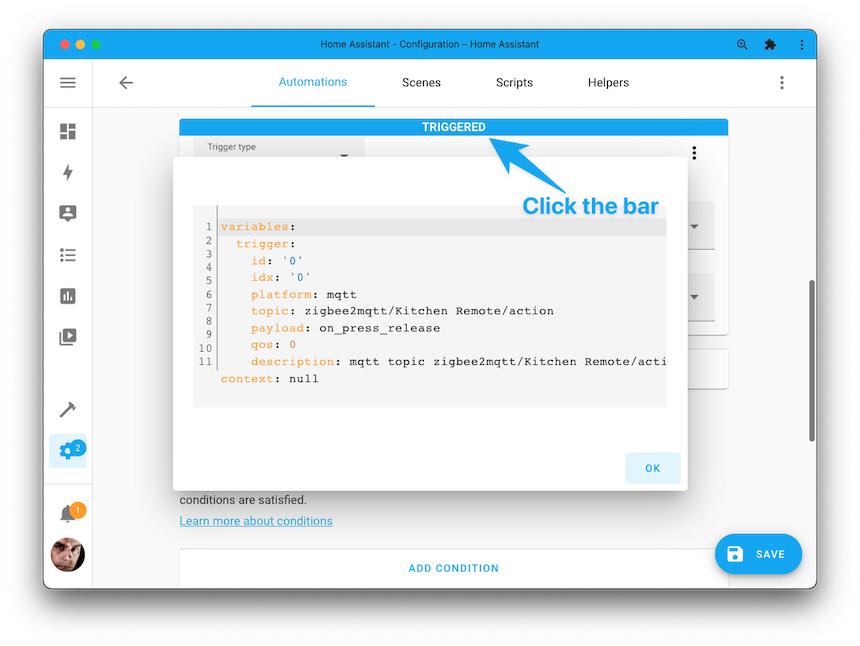 Zones now have a state!

If you ever looked at the state of a zone entity, you would have noticed
it always said: “Zoning”. Not really helpful 🙃

So, to improve on that, we changed that behavior. The state of a zone entity
will now show the number of persons currently in that zone; that is more
helpful! Additionally, it means that a zone has history now too! 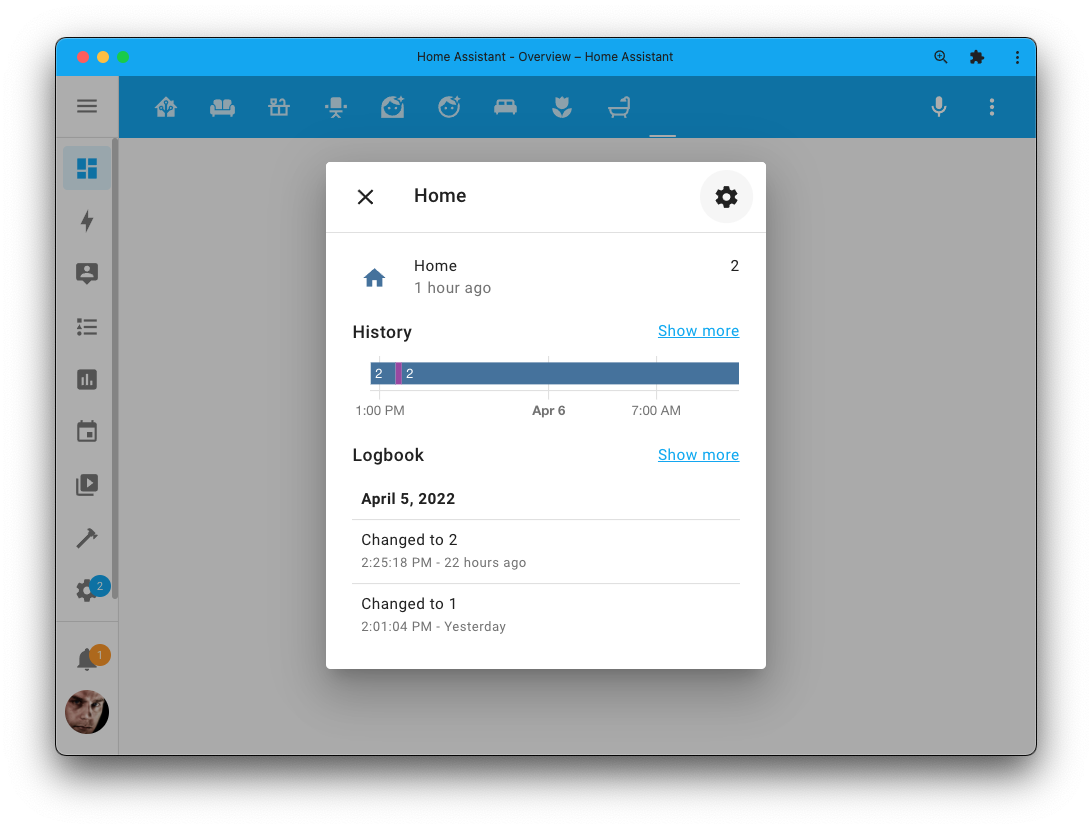 This will greatly simplify automations and scripts that, for example, trigger
on: Nobody is home, everybody is home, someone left home (or any other zone
for that matter). Or use it as a condition to prevent an automation
from running when nobody is home. 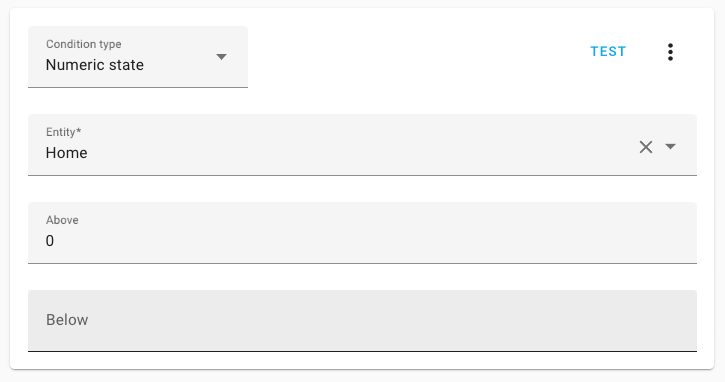 The condition ensures this automation will only trigger if someone is home.

Adjusting unit of measurement for sensors

Got that one sensor measuring a temperature in Celsius, but you prefer it to be
in Fahrenheit? No problem! You can now change the unit of measurement for
temperature and pressure sensors straight from the UI. 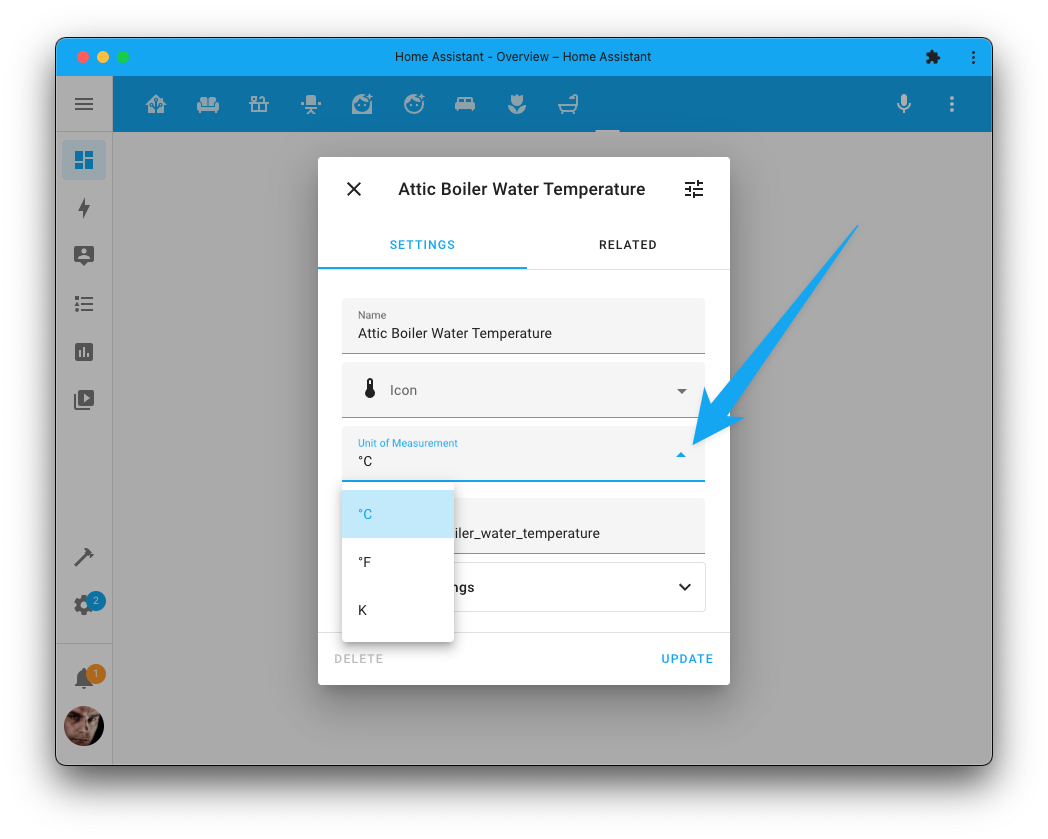 Long-term statistics are great! Until… something went wrong 😅

Unfortunately, things happen. For example, it registered a big spike, or your
solar or electricity meter provided a one-off rogue measurement. These events
impact your long-term statistics, which might forever have incorrect history.

We now have made available a little developer tool that allows you to
correct/adjust long-term historical data to solve these issues.

The new tool can be found at Developer tools > Statistics,
and click the

icon, next to the statistic you’d like to adjust search for the incorrect
datapoint by date & time and adjust the value. 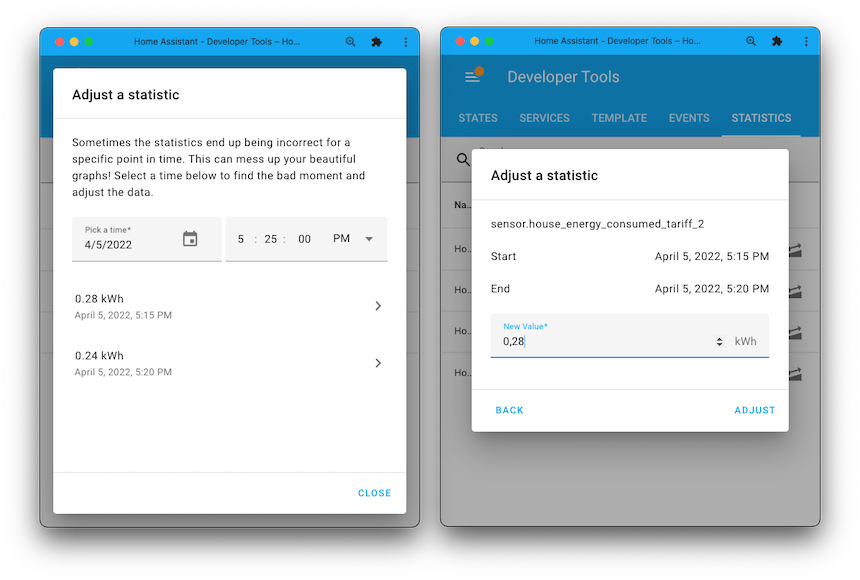 The communication layer between the Home Assistant frontend and its Core backend
has been greatly improved. It now sends over a lot less data and is heavily
optimized to send the least amount of data when first loading up the UI.

The UI will load faster since less data is transferred over the wire,
and there is less data for the web browser or app to process.

This release features write reductions intended to preserve SD card lifetimes,
performance improvements designed to get data to the frontend faster, and
database size reductions ranging from 10-35% for most installs.

As data stored in the database before 2022.4 does not get updated,
the reduction in database size will occur over time with the recording
of new data and the purging of old data.

On top of that, most entity history graphs no longer need to fetch the
attributes from the backend, and as a result, they load much faster after
24 hours of running on 2022.4. This change is especially noticeable
for energy sensors.

For a complete set of changes to the underlying database,
check out the Data Science Portal.

Selectors are UI inputs used throughout Home Assistant. It powers our new UI
helpers, automation editor, and provides UIs for Blueprints and scripts.

We added a whole bunch of new selectors that are usable in your
Blueprints, and extended the options for many existing selectors.

For example, we now have a location selector that lets you pick coordinates
from a map. An RGB color and color temperature selector, an icon, theme, time,
date, datetime selector; The entity, device, and area selectors can now be
configured to accept multiple entities, devices, or areas!

One of the new selector added: RGB Color; it can be used in Blueprints too!

We are looking forward to seeing new and improved Blueprints using these new
selectors on the Blueprints Exchange!

For the latest information about all available selectors and their options,
check out the updated selectors documentation.

For the more advanced uses cases, this release provides: variables on trigger.
It is exactly what it says on the can: The possibility of setting variables
on triggers that become available when that specific trigger triggers.

These variables can be helpful to pass down specific information based on the
trigger that fired. The automation example below shows how a message can be
passed to the notify service based on its triggering motion sensor.