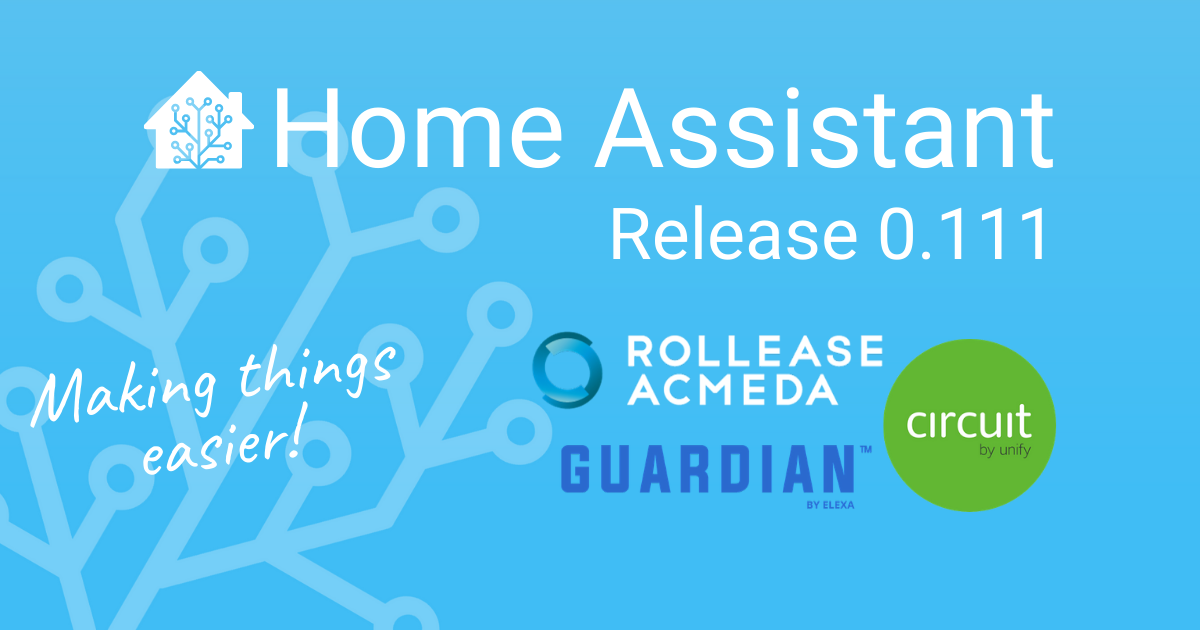 So, let’s face it: the previous release (0.110)
was just jam-packed with new features, tons of upgrades and a lot of stuff
changing. It was pretty exciting! It will be hard to top that.

Personally, I’m always looking forward to the new features a new release brings.
Time to play! This time, however, not so much to play with. Don’t be fooled,
it contains 400+ changes made by a group of 100 contributors! So I’m not sad!

This release is focussed around more stability, fixing, tweaking and tuning.
Honestly, I think it is really nice!

Most notably, is the change on how Home Assistant loads up the frontend.
It is available really quickly now!

It is definitely worth looking at the “All Changes” section this release,
as many many small changes and fixes have been made.

In this version, we start the Home Assistant frontend and API server before all
integrations are loaded. This means you can interact with Home Assistant
sooner than before.

Instead of waiting a couple of minutes until the Home Assistant frontend
becomes responsive, it is available really fast now!

However, with this change, Home Assistant no longer waits for all integrations
to be ready. As a result, not all devices and entities are available immediately.

This is actually good! As this means, an integration that got into trouble,
can no longer prevent the frontend from becoming available. Also, as soon
as it is available, you can change or remove the configuration of a non-working
integration. Finally, it easier to check out your logs when something
goes wrong.

The base for this change came from @bdraco his creative brains, so thanks
for that! @bramkragten did all the frontend work and @pvizeli made sure
the Supervisor handles the surprisingly fast available frontend as well.

One additional note: If you run generated Lovelace, it will still wait for
Home Assistant to be completely started. If you created your own dashboard,
it will show warnings for entities that are not available yet and will update
when they become available.

Another additional note: If you use an automation to set your default frontend
theme, it will be applied after Home Assistant has completely started. The
default theme is used during the startup phase.

Some more tuning to the startup process can be found in things like the logs.
If an integration takes more time to set up, it will be shown in the logs every
60 seconds, indicating that the integration is still being setup.

Another speed improvement is found in the way we load up integrations themselves.
Often, an integration has a basic setup and will then load the various platforms
(like lights and switches) after that.

As of this release, Home Assistant will set up the integration but will
no longer wait for the platforms to finish setting up. The individual platforms
will be finished in the background. Allowing the overall startup process to
continue, resulting in a faster startup.

Integrations now available to set up from the UI Home Assistant Core 0.111

The integrations below have been removed: